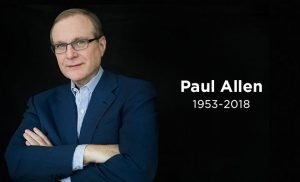 Microsoft co-founder Paul Allen passed away Monday. He will be missed by all in the vintage computing community.

“Microsoft would never have happened without Paul,” Gates wrote today. “In December 1974, he and I were both living in the Boston area — he was working, and I was going to college. One day he came and got me, insisting that I rush over to a nearby newsstand with him. When we arrived, he showed me the cover of the January issue of Popular Electronics. It featured a new computer called the Altair 8800, which ran on a powerful new chip. Paul looked at me and said: ‘This is happening without us!’ That moment marked the end of my college career and the beginning of our new company, Microsoft. It happened because of Paul.”

Together they ported Dartmouth BASIC to the Altair, made it available through M.I.T.S. on paper tape, and the rest is history. He beat cancer in the 1980s, retired from Microsoft, and became a philanthropist and entrepreneur.

Fast-forward many decades: Allen began his own museum efforts in the mid-2000s, first with PDPplanet.com and now with Living Computers: Museum+Labs which is a good friend to Vintage Computer Federation and hosts VCF Pacific-Northwest.

“Whether you collect cars or computers, or I have a few World War II airplanes… It reminds you of the more limited things engineers were able to do. That was a time of true craftsmanship and innovation,” Allen told me in 2006. “I think there’s a fascination with having something from a certain period of time and they’re still working artifacts.”

We wholeheartedly agree, Paul, agree and will bootstrap our Altair from a 4K BASIC paper tape in your honor.