We closed our NJ museum last month and we’re re-opening with twice the exhibit space in time for VCF East next month. This past weekend we brought in some big iron: half of our UNIVAC 1219B mainframe, circa 1965; a Cray YMP-EL supercomputer, from 1992; and a StorageTek 9710 Library Storage Module, hailing from 1995. 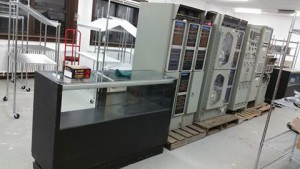 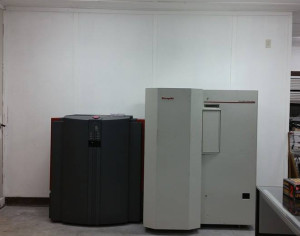 The supercomputer and tape library will be part of an exhibit of “modern history”. The wall behind them will be painted circuit board green and will have pictures of several dozen other recently-obsoleted products, such fax machines, Rolodex, paper maps, handheld game consoles, and so on. A sign across the top will state: “Everything on this wall now fits in your pocket.” We’ll have trace-like lines going from each item along the edges to a modern smartphone in the center.

Not pictured but also recently moved in: a 1956 Bendix G-15 vacuum tube computer, a custom 1958 George Philbrick analog computer originally built for the Massachusetts Institute of Technology’s mechanical engineering department, and a 1965 IBM 1130.

Coming soon: lots of minicomputers and dozens of microcomputers!