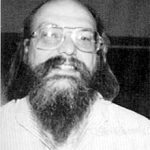 Ken Thompson, who invented the UNIX operating system with Dennis Ritchie at Bell Labs in the 1960s and 1970s, will be a star at Vintage Computer Festival East this year! It’s the 50th anniversary of when their work began. Thompson also wrote the programming language B, which preceded Ritchie’s world-changing language C. His accomplishments on these and other important works in computer science must be acknowledged. Ken will be interviewed on stage on Saturday morning, May 4, by Bell Labs’ Brian Kernighan of K&R fame. Brian himself spoke at VCF East in 2015.