The original Vintage Computer Festival was founded by Sellam Ismail and held in Pleasanton, California in October 1997. It finally has come to the greater Atlanta area !

Vintage Computer Festival Southeast – a public celebration of computer history and nostalgia – was held on Saturday & Sunday, April 20 & 21 2013. Our mission remained the same as that very first event:

The main mission of the Vintage Computer Festival is to promote the preservation of “obsolete” computers by offering attendees a chance to experience the technologies, people and stories that embody the remarkable tale of the computer revolution.

The VCFSE was hosted and produced by the Computer Museum of America and the Atlanta Historical Computing Society, and sponsored online by VintageTech.

One day adult tickets to the VCFSE were $10, with a two day pass for $15. Children ages 17 and younger were admitted free when accompanied by a parent or guardian.

News Coverage About the show

A large premier exhibit welcomed each attendee as they entered the Festival – The Apple Pop-Up Museum  It tells the story of how a small start-up company, founded in a garage by two young friends, became the leading consumer electronics and personal computer company in the world. The exhibit displays an exclusive collection of game-changing Apple personal computers and consumer electronic products while presenting the history of the company since its founding in 1976 to the present. An Apple I, the first disk ][ and controller card prototypes, original apple ][, original Lisa and even a Xerox Alto are among the rare artifacts to be displayed, and much, much more. Within the 6,000 square feet of display space that this premier exhibit occupies will be the following rooms: Pre-Apple Room, Apple I Room, apple ][ Room, Turmoil Years Room, No Founders Left Room, Jobs’ Come Back Room, Ive’s Colors Room, iPod/iPhone/iPad Room, The Timeline Lounge and Apple’s Present to the Future Room.

We had dozens of exhibitors from all over the region, plus many from other parts of the country. A large variety of historic computers were represented in the exhibit hall for live demonstrations by their owners.   A vintage game station was available for children and adults to play classic games on classic computers and game console systems (projected on a 20+ft wall)

Our shirt design for our first show was : 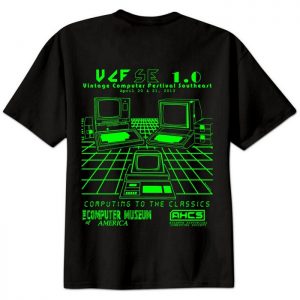